My 10 Least Favorite Things About Being Frugal

Money, Save Money / by Sara / 4 Comments 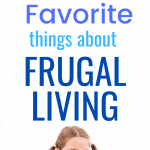 My 10 Least Favorite Things About Being Frugal

When frugal is in your genetic makeup, and it is a part of who you are, you have no choice. It is like having brown eyes or a mole on your right cheek. It is a unique part of you.  Everyone who knows you know about it.  If your friends had to describe you to a stranger, it would be in the descriptive words – five foot three inches, a little chubby, brown shoulder length hair, brown eyes, smiles a lot, wears glasses and FRUGAL.

Sometimes you don’t have a choice.  You are who you are, and these things aren’t so easy to get around.  You have been doing it for so long; it has become a habit.  Even when you WANT to splurge and take a break from frugality if only for an afternoon or a meal, it is ingrained within you, and you just can’t do it.

Some things automatically run through my head.  Words like “How much do you have left in your fun money?  What about your spending freeze? What is wrong with the sandals you already have?  Didn’t you just buy a coffee yesterday?”

What makes it even harder is when you have these thought going through your head while you listen to your husband talk, you hear  “What do you mean you spent $6 on a wrench?  Don’t you know someone who already has one you can borrow?  How much for a kayak vest?  Why TWO kayak carrier racks?  You bought another hat because the 78 hats you have just won’t work for you?”

Most of the time I can refrain from asking these questions out loud, but that doesn’t mean they are not going through my head.

They have become habits.

These behaviors of being frugal have become habits that I have honed through the years.  First out of necessity and now out of just everyday habit.

To create a habit, you have to create what is called a habit loop.  First, there is a trigger that tells your brain of performing the behavior.  Second, there is the habit itself or the practice.  Last, there is the reward.  There is always a reward.

The reward for being frugal has the money to do the other things that you want to do.  So, if you’re going to get out of debt, so you are not overspending, that is the reward. If you are saving for a new computer, so you only allow yourself one lunch out per week, your prize is those successful savings and that new computer.

If you continue this loop over and over again, these habits will become a part of who you are, whether you like it or not.

There are moments when I wish I weren’t so frugal and even times when I just don’t like that about myself.  Those times are rare because it is a quality in myself that I am proud of, but they do happen.

Here are my ten least favorite things about being frugal.

1. Wanting a pedicure but knowing I have two weeks left before my budgeted scheduled time.

2. Craving a Starbucks grande soy latte but knowing I already spent my fun money for this pay period.

3. Driving by Panera and wanting my favorite spicy Thai chicken salad but knowing I already had one this pay period.

4. Seeing a $5 coupon from Kohl’s in my email but knowing I am not spending money on clothes this year unless I have a gift card.

5.  Going into Hobby Lobby and wanting all the crafting supplies but knowing it would be a waste of money at this point in my life.

6. Feeling too tired to go to Aldi and thinking about Hannaford to go service but knowing I would end up spending an extra $50 on groceries.

7. Missing Target but knowing I already went once this month.

8. Seeing a book on Instagram that looks good but knowing I have a whole shelf I need to read before I get any more.

9. Looking at my best friends most adorable summer sandals thinking how cute they would look with my navy skirt and pink floral top but knowing the money would come out of my fun money and that would mean sacrificing my pedicure in two weeks.

I am an only child, so it has taken me many years to learn to curb the I WANT IT, AND I WANT IT NOW thoughts in my head.  Society has taught us instant gratification and has given us the means to deliver.  Technology grants us that new book that we just saw instantly.  We can google where the closest Taco Bell is and many times, be there in a jiffy.  Amazon will deliver to us whatever our heart desires in maximum two days, sooner if you live where drones deliver.

Getting Rid Of Stuff And Decluttering Saves Money
Next Post:Irresistible Ideas To Organize Your Car